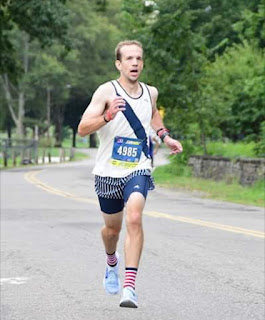 Taking 4 years off from the competitive world and only training consistently for the last 3 months, Schweikert is looking to make another go at his running career.

“In the last 4 years, I’ve ran about 200 miles,” Schweikert said. “When I was competitive running that was over a 2 week timeframe. So in 4 years doing what I use to do in 2 weeks essentially, so for sure took time away.”

According to the former Pioneer standout, taking time away from running was essential due to coaching and putting his main focus on growing a family.

“Coaching football and basketball made it easy to say I didn’t have time for it. Also having three kids during that time shifted focus and priority.”

With some encouragement from an old running friend, Schweikert found himself signing up for the Jackson Night Glow.

“How it all came about really was Tony Migliozzi convinced me to run the Jackson Night glow ,” Schweikert said. “I said this is a terrible idea, I haven’t raced in 4 years.This is going to be awful. He said just do it and I originally said no. Eventually he got me to do it. At this point I ran 60 miles in the past year, so it was off nothing.I ended up running a 17:56 there and felt like death.”

After a challenging start to his comeback, Schweikert had a conviction to start training again. This time around he would take patience as his guide; along with some wise words from his daughter.

“I tend to go full force when I get back into things so I knew being patient would be a crucial factor this time around,” Schweikert said.

He continued his thoughts.

“Before I was getting ready to run (Jackson Night Glow), my daughter asked, “Can I come watch ?, “Schweikert said. “I said no it is past your bedtime and she asked me “ Are you even going to win?” I was like say what? No, there is zero chance. Then she came back with “ Well why are you even running if you aren’t going out with the mentality to win? Well, I guess she has the right mindset.”

Taking training day by day, Schweikert’s patient and diligent mentality led him to a surprising outcome.

“It took a little bit of time to even remember how to do workouts,” Schweikert said. “I’ve actually gotten back in shape a lot faster than I had expected. I am not going to pretend that I thought I could race a 15:28 by this point in training. My goal was to be ready by the Turkey Trot.”

Taking a quicker turn in fitness than anticipated, Schweikert is optimistic about racing competitively and looks to make an impact in the elite field next Spring.

“I do not want to make too many plans and I have taken the approach to take things day by day and I have been loving it,” Schweikert said. “For my future plans I am thinking let's try a little bit of everything. Next up, 10k Peace race to see where I am at in that distance and then I do plan on doing the rivalry 4 miler. From there, I would like to break 15 at the turkey trot. I think that would be really cool to go after. That will be it for this year…”

“Training through the winter will be essential for the Spring. Getting a strong winter in and then go after the HOF Half Marathon record.

Having hopeful goals, Schweikert continued to share the purpose behind his comeback.

“I don’t want to get ahead of myself by I do think it would be a really cool story if I could get close to where I was competitively with how much time I have taken off,” Schweikert said. “It is more so about being an example for my athletes and kids and showing them if you work hard for something, day in and day out regardless of the hiccups or bumps, things are possible.”

---Get to know the inspiring local runner ---

This or That?
5k I Half Marathon: Both! My two favorite distances to race.
Fall l Spring: Love the temps and changing of leaves plus XC season!
Running2win I Strava: Strava, it loads up from my watch to my phone for me. Can't beat that. I'm terrible at keeping a running log.
Facebook I Instagram: Facebook, I'm old.
New Balance I Brooks: New Balance
Adidas I Nike: Nike
Track and Field I Cross Country: Cross Country. I enjoy the team atmosphere.
Football I Soccer: Football
Gatorade I Body Armor: Try Nooma. Based out of Cleveland. It hydrates better than anything. But I'd pick Body Armor out of those two.
Continuous tempo or Mile repeats: Continuous. I hate breaks in my running.
Coffee I Tea:Trying to avoid both, but I do love the taste of coffee.
Higher Mileage I Lower Mileage: I'm not sure what's high or low, but my favorite is to be around 100 miles a week.

Popular posts from this blog 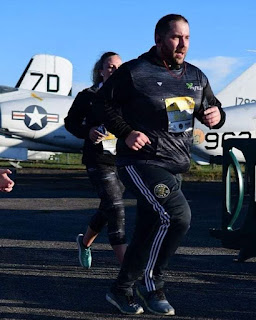 This Friday we are featuring Louisville runner Jimi Brantingham. Brantingham will be competing in his first half marathon this April for the Pro Football Hall of Fame Marathon weekend.
“I work for a company that has ties to the marathon race timing industry, so I have seen many bibs during my time there,” Brantingham said.” After many years of applying timing tags to various bibs, I decided to run a 5k. My first race was the Steelers 5K Labor Day weekend 2018 at Heinz Field. Since then I  have been hooked. I have completed a total of 16 5ks since my first race and last year did the half marathon relay at the Rock HOF in Cleveland. My most recent runs included 2 5ks within 3 days of each other in Clearwater, FL. I am very excited to be doing the combo 5k and half marathon this April!”

Brantingham contributes a lot of his success to trainers and fitness instructors who have helped guide his training along the way.
“Without the help of all my trainers at myFitLife, I wouldn't be where …
Read more 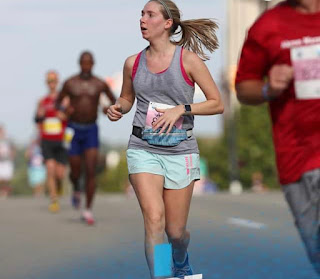 This week's "Feature Runner Friday"  goes to Ashley Dunbar; who will be competing in our half-marathon race this late April. Born and raised in East Canton, Ashley know resides in Cuyahoga and will be completing her first half-marathon.

Check out how the East Canton native began her running journey.

"I used to think runners were nuts," Dunbar said ,"In high school, I never would have dreamed of running more than a mile for "fun." Once I got into college, I started thinking a little more about trying to run a few 5k's for the heck of it since a lot of my friends were doing them...

"At the time, I worked at a tanning salon and my boss was part of a running group that was training for the Akron Marathon," Dunbar said. "A few of the girls at the salon had decided to join her group to run a few times a week, just for the health aspect of it. One of the girls had asked if I would do it with her, and at first I thought she was crazy, bec…
Read more 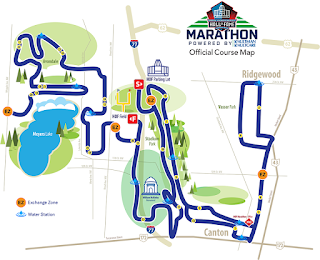 Happy March, everyone! We are finally down to the single digits when it comes to counting down the weeks until marathon weekend!
We are officially less than 8 weeks out and we are incredibly excited about our finalized marathon course.
A few weeks ago I discussed ways participants can properly fuel up and essentially have a fuel plan in mind come race day. Practicing proper fueling techniques is important to incorporate in your training regime leading up to the race.
Getting familiar with how your body reacts at certain miles and being aware of what it needs/can handle will be incredibly important.
Speaking of awareness, this week I want to encourage racers to become more familiar with our racing course. Oftentimes when we think of “training” we initially think of the physical part. The runs, how much volume to do, and the amount of strength to incorporate.
These are all important factors of the journey, no doubt! Though if we are considering optimizing our performance, we have to conside…
Read more